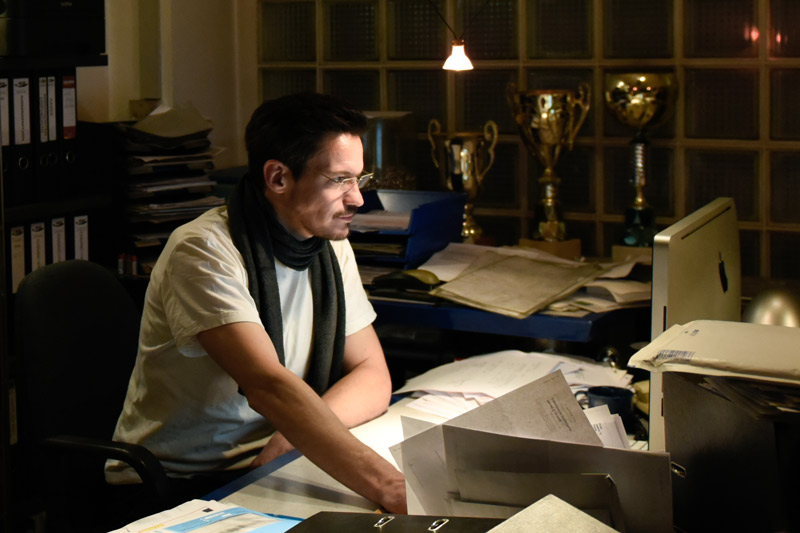 Karl took over a metal workshop

A Modern Approach to Craftsmanship

Austria's capital Vienna has a longstanding tradition in brass work that is mainly rooted in the Art Deco Movement of the early 19th Century. At Karl's the latest computerised technology is integrated to create contemporary designs for exclusive small scale production.

How did you start working in the metalworking industry, and how come that you now own your own business?

Karl: I grew up in Styria. In the late 1980ties I moved to Vienna where I made a four year apprenticeship as a toolmaker. After 3 more years in the same sector, I landed in direct marketing, soon I started back to selling tools in my old metal sector.

It always had been in my mind to found my own metalworking shop. As a field salesman I realised that I could make the right contacts to one day take over an existing business. In 1994 I found this shop. It's owner wanted to retire, so I bought it with the business partner I had at that time.

But you now work here alone?

Karl: Yes, while still serving the existing customers I wanted to go more into individual requests, prototyping, machine and especially motorbike parts that are out of production. You had to think ahead and that in the future most of the serial work would move East, first to Eastern Europe, later to Far East. But it was mainly about doing more challenging work and exploring the new technologies.

We mainly produced research equipment for Universities, old Harley Davidson parts and plenty of bling-bling jewelry. It was a stressful time, working around the clock with only three people. For my partner it became too much workload, he wanted to leave the business. I think it was better for him this way. But, you know, we started to work with CNC and CAD Technology and the machine had to run all the time to amortise the investment. 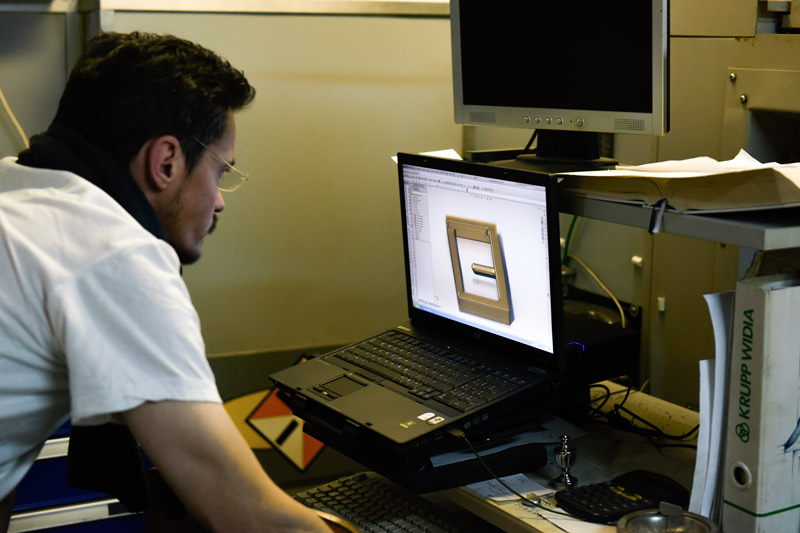 The 3d-Model is sent to the CNC-Mill 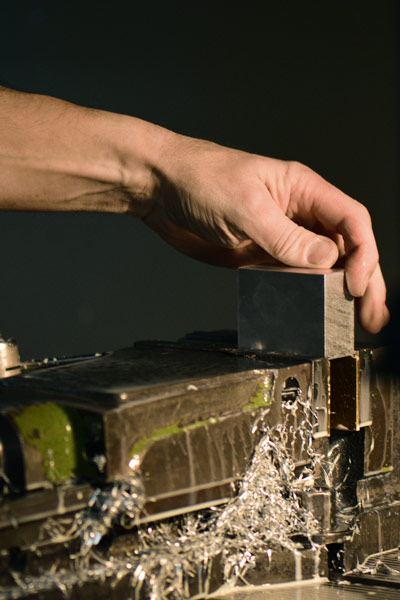 Mounting the brass block on the mill 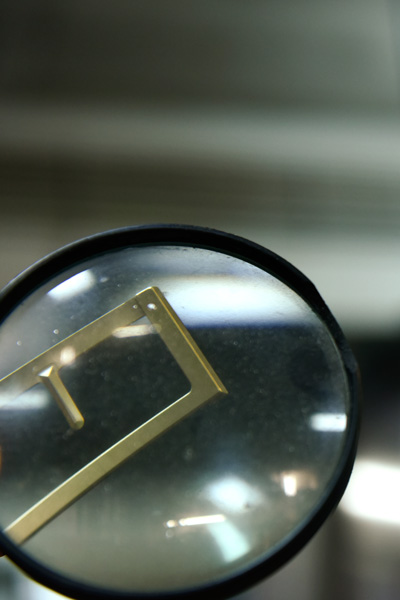 Controlling the parts for surface cuts

So already in the beginning it was about very specific objects, small things. How did you start with special orders?

Karl: During my apprenticeship I made a lot of unusual jewelry myself, for friends and relatives. There was just the urge to make something beautiful, so to keep it practical I started with birthday gifts (laughs). It is a pretty interesting combination with the technical aspect, which is strongly influenced by manual skills and experience combined with fine work.

What is special about the metal parts you made for BATLINER?

Karl: The parts are not cast parts, meaning it is not liquid brass poured into a mold. Each buckle, zipper puller and strap suspension has been milled separately. First they are milled with CNC technology, then drilled and lathed by hand.

With the buckles for example, Katherine came to me with the idea that they have no moveable part and I could take out a very similar object that I had experimented on. We also were both on the same page that the metal should be lively and the surface not be varnished to high-gloss. We spend a lot of time on the finish and the patination, it should age with time but not be retro romantic. A contemporary shape, light, discreet and not too technical.

Karl: With the CNC-machine you can only do certain steps, it cuts the shape out of a metal block, each piece is milled separately and I have to mount each part five to six times because the machine can't just turn it by itself. This first CNC-made result has sharp edges and rounded corners, therefore the finishing is time-consuming. The corners are punched out with a custom made tool that I made in-house. Then every edge is hand-polished with a machine to become smoother, if the parts have areas that are difficult to access I additionally use a hand rasp to remove sharp elements that otherwise could cause injuries. 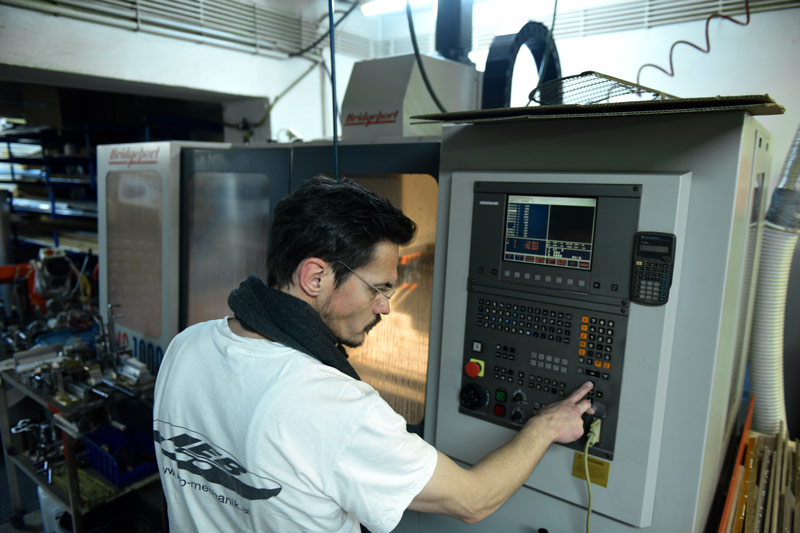 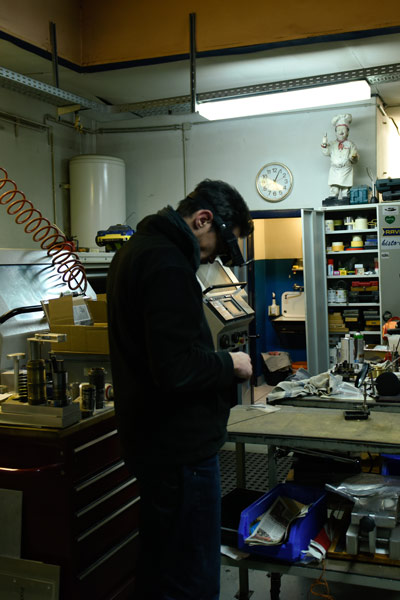 All screwholes are marked manually 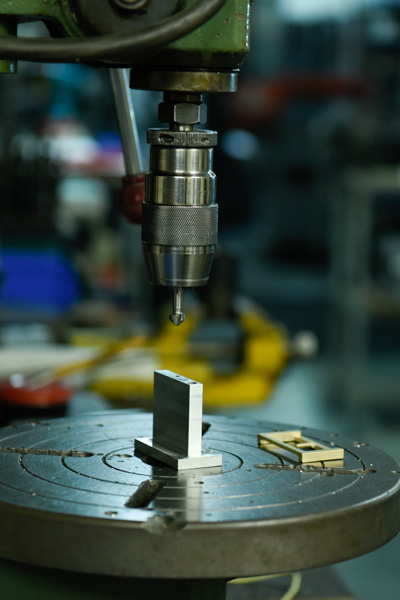 Holes for screws are drilled by hand

And then there are several steps to give the surface a specific look?

Karl: Yes, we wanted to keep it natural so that each metal part is a tiny bit different. So I polish the metal in a way that the structure of the press cast -that means that the raw material has been pressed while liquid to give it a higher density - is still visible. Then we work with acids, bases or bleaches and similar patination agents. If you look closely there is a fine natural pattern on each brass element.
In regards of time two thirds is manual work, one third is done with the machine. But what is done with the machine could hardly be done manually, it would take days.

So the CNC-mill cuts each piece out of a metal block. Is there a lot of wastage of material?

Karl: No, the machine collects the discard at the bottom, all of it is brought back to the steelmill and there it is made to new metal.

Karl: Certainly when there is a certain freedom in creation, respectively if I work together with the customer and we both have an impact on the design.
Also I enjoy to produce purposeful objects that don't exist yet after my own ideas. Since I know the processes I always realise things based on the tools and machines that are available at the workshop, I just have to be careful that I do not get over-enthusiastic to use all tools I have here on one object, just so no equipment gets dusty (laughs). 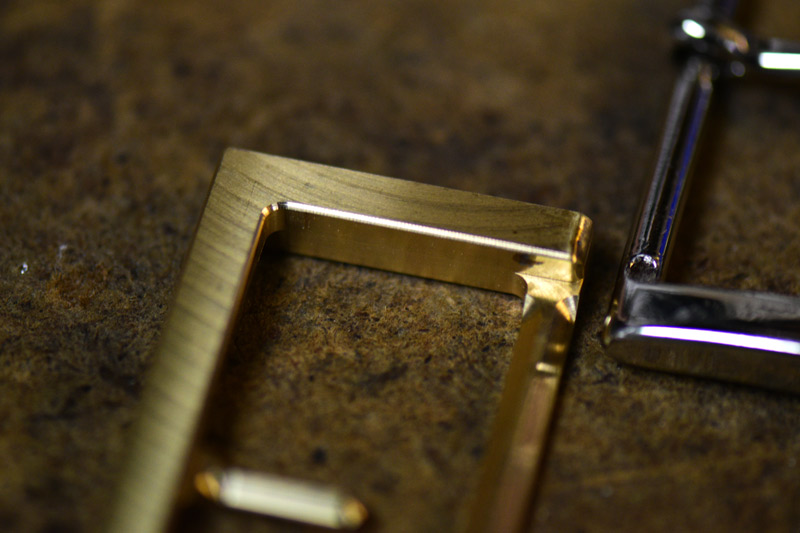 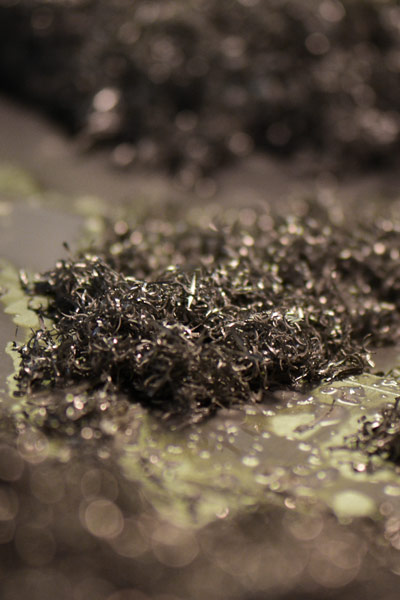 Cut-off is collected for recycling 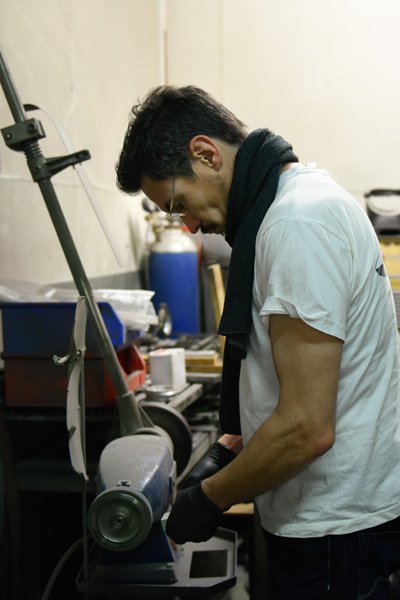 What has changed the business most in the past 20 years regarding skills and possibilities?

Karl: I would say that in most former "craftsman" businesses that mainly relied on purely manual skills nowadays require technical knowledge. One has to be able to work well on a computer and master certain software and have a certain interest in technology. For me, combining modern technology with the old knowledge of craftsmanship make my job more exciting and challenging.